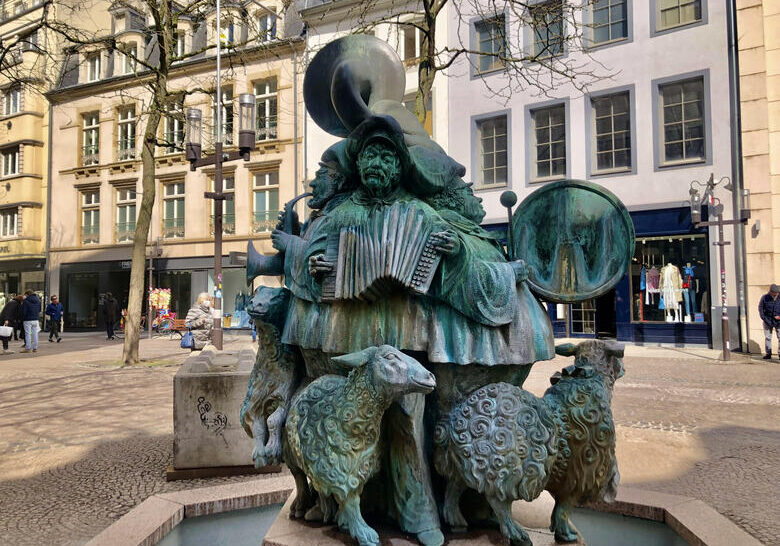 A lot of history and a bit of fun all packed in one of the most popular fountains in Luxembourg City, created by one of its most popular artists – Wil Lofy’s Hammelsmarsch.

The Hammelsmarsch is one of the oldest Luxembourg traditions, and it’s very much alive and well – except that hammel, or sheep, no longer accompany the local village bands marching through the neighbourhoods. Ask anyone living in the Grand Duchy for any length of time and they’ll know the ‘Hammelsmarsch’ tune they play – the text was written by Luxembourg’s patriotic poet Michel Lentz, who also wrote the country’s national anthem.  Village bands still come around playing this tune, and they’ll pause in the street and ring your bell, asking for donations to keep their music club going strong. Originally, the Hammelsmarsch was an invitation to the local funfairs, and it’s still heard around the country before the beginning of the region’s biggest and most popular funfair, the Schueberfoeur, which opens in late August and runs for three weeks on the Glacis car park.

Now back to the fountain – Wil Lofy created a jovial, fun tribute to this beloved Luxembourg tradition, and he made it even more jovial with an insider joke. First, the sculpted figure playing the accordion is Lofy’s self-portrait, and secondly, he’s discreetly flipping someone off. Some say Lofy was miffed at local politics, others say it was his revenge on the shop the figure faces, the owner of which fought against the fountain’s placement.