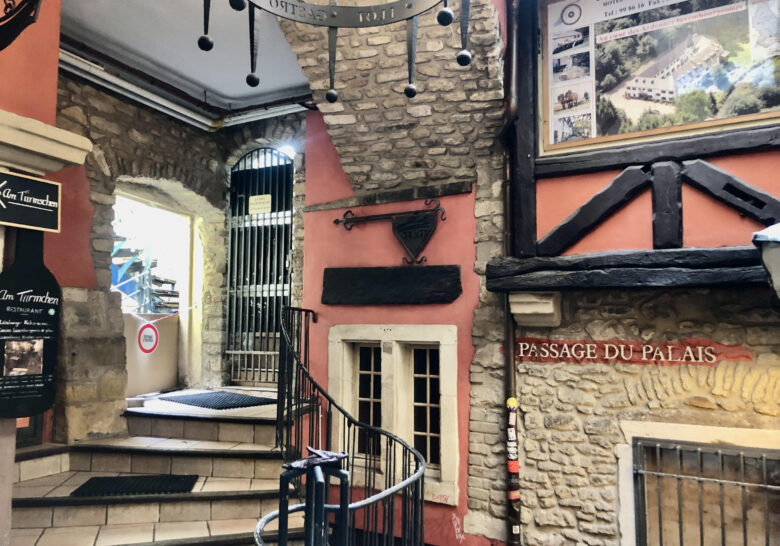 You can walk through buildings – and back in time – by traversing Passage du Palais. A Roman mosaic on the wall hints at the site’s origins – it’s of handsome fish looking surprisingly fresh after all these centuries.

Passage du Palais is in the heart of the fish market area, the oldest part of the city and its one-time centre, at the juncture of two Roman crossroads.  One entrance to the passage is from the Rue de l’Eau – fish are never far from water.  On the other side, you’re just steps away from the corner of the rue de la Loge, where you’ll see the famous ‘Mir welle bleiwe wat mir sin’  motto (We want to remain what we are) painted on a turret.  If you walk in the other direction, you’ll follow the narrow cobblestones around a bend and straight back out to the Rue de l’Eau.

The passageway is not only a glimpse back to ancient times, it leads to the Am Tiirmschen restaurant. As in Roman times, you can find sustenance in this quarter, but today you can spend euros at picturesque restaurants rather than trade denarius aureus for an uncooked trout.

You could do worse than to cast your net at the Caves Gourmand or the Bouquet Garni, and of course, if you’d like something stronger than what fish swim in, there are plenty of popular watering holes. And what about the palace? Well, this passage doesn’t really lead to it – bit fishy, isn’t it?